This was the original call for participants in the project which went out all over Hungary through social media channels, NGO’s, radio and word of mouth. It led to a lot of debate and I would still like to show it in other places in Europe.

I’m looking for models for an exhibition of twelve portraits of Roma which draw inspiration from famous paintings of old masters.

Apart from producing aesthetically satisfying images, my wish is to examine the tension which a person experiences when struggling to choose a role for himself/herself when majority society in its need to feel secure in the presence of stable archetypes (always stronger in the case of political and economic instability) subtly undermines any attempt to break free of seemingly inevitable destiny.

I hope that people whose imagination has been stimulated by the description will come forward.

I will meet them in a group and show some pictures of old masters which I like as inspiration and they will be invited to say which role they would like to play and be free to suggest roles of their own.

I intend to record interviews with all the subjects where they will be asked to say why they chose to be photographed playing a particular role and they will be questioned on their aspirations and asked if they feel that being Roma has any bearing on their destinies.

The project is open to anyone who is Roma.

If you are interested, please send an email saying something about yourself and send a photograph to this email address: terri@potoczna.com

This is an art experiment, there is no money involved.” 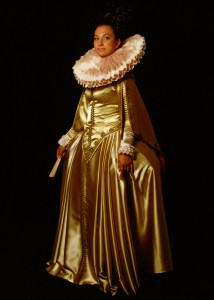 Interview with Nikolett Suha (volunteer in the Gypsykings project)

Terri:  What made you decide to be in the project?

Niki:  I’d never done anything like this before and I really wanted to have a go because I loved the concept. You always only see negative images of roma people in newspapers and in the media –  all those typical black and white pictures or videos taken in some housing estate or other … I thought it was a great idea that for once a Roma person could take part in something like this and that it would be exhibited.

Terri:  Why did you choose your character?

Niki:  Actually I browsed various periods looking for something special, something that would catch my eye and be unforgettable.   I loved the costume … it’s the kind of dress that pretty much any little girl dreams of … yes it was a princess dress that people of that rank then wore every day.  Not the kind of dress that I could have ever imagined wearing but I picked it thinking – gosh, I’ll send it off as my proposal and see what you thought.  It was as simple as that and there it is, hanging up, just waiting for me to put it on and be photographed in it!

Terri:  And why did you pick the painting and the character?  What do you think about the person in the painting?  The Marquess Brigitta Doria Spinoza… did you look her up? 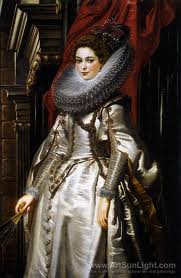 Niki:  No, I didn’t research her, but in the painting she looks like someone who is aware of her rank and that the painter should be pleased that she is modelling for him…  I hope I will be able to carry off that look – “you should be grateful that I have condescended to let you photograph me”  (laughs) … So, I see her as a woman who is has a very strong character and is very determined and who gets what she wants.  You can see that she knows why she is standing there and how she should project herself…

Terri:  And is that how you are?

Niki:  I believe so.

Niki:  I try to know be clear about my goals and my motives

Terri:  And what role  does that sense of belonging and identity fit in to your life?  What does “belonging” mean to you?

Niki:  Belonging?  The feeling of knowing where you belong and identity?   I love being a Gypsy, a Roma, I don’t care which word we use …

Terri:  Let’s talk about that word for a minute …

Niki: Oh, oh!  that’s usually something people get hot under the collar about – the word  “Gypsy” or “Roma”

Terri:  I have noticed that here in Hungary and when I visited Romaversitas, people just used the word “Gypsy” as if it were perfectly normal but when I talked to some Roma from Macedonia …

Niki:  We have also just had some youth exchange meetings and when the Albanian and Macedonian or German Roma youth were here – and most of the Roma from Germany were refugees from the Balkans anyway – as soon as they heard us saying “cigany” (the Hungarian word for “gypsy” this would immediately start an argument.  We have stuck to using the word “cigany” – for us in Hungary it’s not a problem and we’re used to it.  We have a different attitude.  It’s true that the word “gypsy” has many connotations, in some languages it can be synonymous with “outcast” or “outsider” or “traveller”.  In Hungary its usage is quite acceptable and isn’t necessarily something negative in origin or has pejorative connotations.  And the proof of this can be found in the phrases such as “gypsy music” or the “gypsy anthem” or that if you swallow something and it goes down the wrong way, we say “it went the gypsy way”, not “the roma way”  Do you know that expression?

Terri:  No, and what do you think of that?

Niki:  Well, we see those things differently – I don’t find them insulting or hurtful, I have said may times that you can use the “gypsy” word nicely and the “roma” word in a way that it has ugly connotations.  So I think that the word “roma” is a diplomatic word used by certain politicians and gypsy groups. I personally don’t think it’s that important.  It depends on the circumstances, the language register or the emphasis.  I don’t get hung up about it, like when I’m referred to as a gypsy girl…

Niki:  of being called names, of being shunned or singled out? Of being rejected?  Yes.  I went to kindergarten for a year and that was more than enough for me – it was compulsory to attend for that long – they hated me at kindergarten and all through secondary school.  I was too clever – always first in the class… and also because the teachers liked me.  Don’t ask why but they did.

Terri:  Because you’re so nice!

Niki:  I’m trying to grow out of that because being nice isn’t always to my advantage!  Sometimes it’s good not to be so nice.   The teachers used to drag me off to all sorts of competitions because I was always an excellent pupil and I got resented for it … even down at the local shop…  there was a boy who really hated me at school and one day his grandmother was standing in line at the local store buying bread and milk and my father was right behind her only she didn’t see him.  She was talking to another Hungarian woman and asking how on earth was it possible that her little grandson got a bad mark while that little gypsy girl got a gold star.  What was the teacher thinking!!!  It was usual in the village for the certain pupils to bribe their teachers and class monitors with all sorts of gifts and flowers but it still didn’t get the children any more good points.  We never gave anything because we had nothing to give as there were seven of us and my parents had to work hard to feed us all and there was nothing left over.  Finally I’ve come to realise that especially around Borsod, Szabolcs and Hajdu where you have the biggest concentration of Roma, people are much more anti-Roma to the point of refusing to sit next to a gypsy on the bus.

Terri:  What is your background?  You went to Debrecen University …

Niki:  I’m from Parasznya, Borsod county.  It’s a small village with about 1300 inhabitants.  That’s where I went to school and where I grew up.  I wouldn’t say I had many opportunities, in fact the average person there doesn’t have much self confidence and wouldn’t necessarily know or want to get away from there,  whether it to go to university,  to find a job or to go abroad. 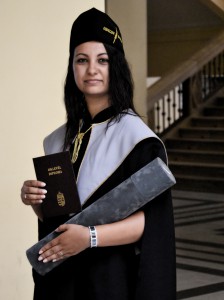 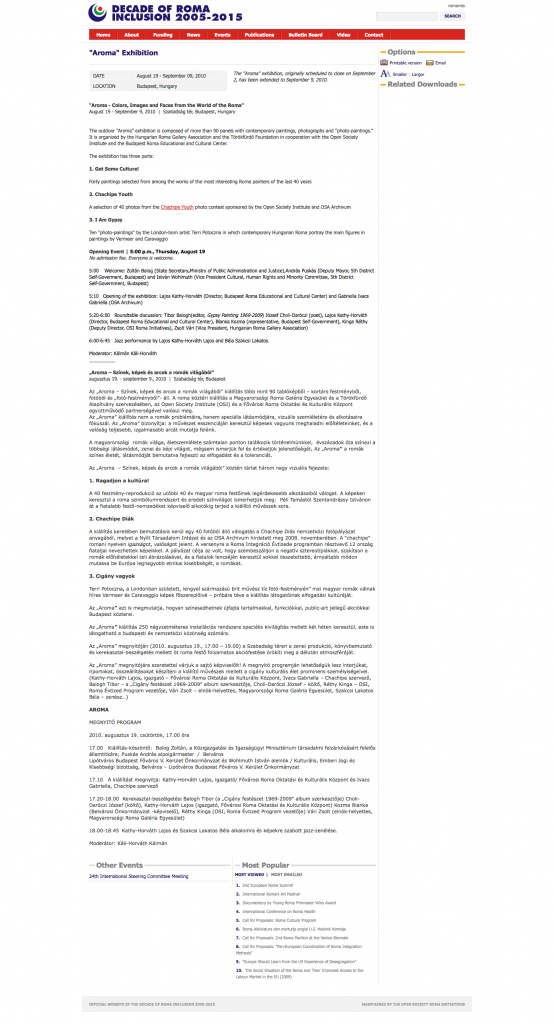 MTV (Hungarian National Television) interview about the exhibition, together with one of the participants.  Fanni Trendl is a student researching Romology.  She had selected “The Lady in Purple” which is one of the most famous and important portraits for Hungarians.